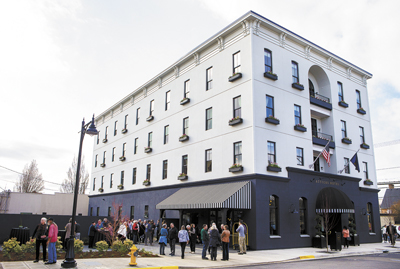 A crowd gathers in front of The Atticus in downtown McMinnville during the community open house in late March. Photo by Rockne Roll

Oregon wine country’s newest hotel, the Atticus, officially opened April 1. The 36-room luxury lifestyle hotel is set just off of historic Third Street in downtown McMinnville on the corner of Ford and Fourth streets. Fit with a hidden drawing room, original art and furnishings from local makers, plus a house restaurant in Bless Your Heart Burgers, Atticus looks to offer an immersive Willamette Valley experience for residents and tourists alike.

Looking at the four-story structure, it’s tough to imagine the building’s groundbreaking took place just last spring. However, an efficient year of construction led to an ahead-of-schedule opening. The building looks very much at home amid its historic surroundings, while classic features such as raised ceilings and an eye-catching cornice pay homage to McMinnville’s rich architectural legacy.

“We’ve been chasing this dream for a long time, and it’s been so exciting to finally open our doors to both guests and our community these past few weeks,” said Erin Stephenson, hotel co-owner. “The excitement has been palpable, and the reception has been incredibly warm.”

Inside, the hotel offers an immediate nod to the past with a display modeling a nutcase featured at the 1909 Alaska-Yukon-Pacific Exposition in Seattle. It’s a wooden archway packed full of the Yamhill Valley’s once-prized crop, the walnut, with a nod to the town’s former nickname of “Walnut City.” Details like this reside around every Atticus corner, combining to illustrate the rich agricultural backbone that’s existed for some time in Yamhill County. 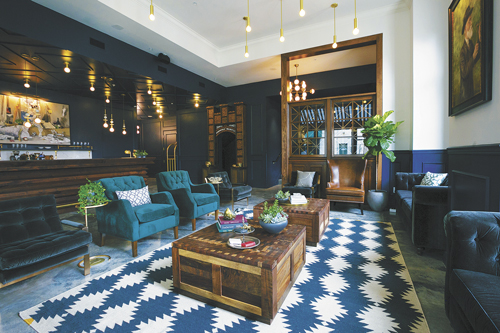 The lobby offers a glimpse of the high level of design found throughout the property. Photo courtesy of the Atticus

The restaurant brings a familiar culinary name to McMinnville in John Gorham. The chef and restaurateur opened beloved Portland tapas restaurant Toro Bravo in 2007. He’s gone on to open a family of other eateries through his management firm, including Tasty n Sons, Plaza Del Torro and Shalom Y’all. This is the second installment of the Americana-themed restaurant, with the original Bless Your Heart located in downtown Portland’s Pine Street Market. The restaurant and bar features burgers, fries, inventive cocktails, as well as brunch and room service menus.

While The Atticus follows an established bed-and-breakfast charm and relatively recent high-end options like The Allison Inn & Spa, it infuses a unique flare to Willamette Valley wine country. Offerings like the Luxury Bunkroom — fit with built-in bunkbeds and storage cubbies for up to six people — and the 1,500-square-foot Penthouse separate the independently owned and operated outfit from chain establishments.

The Valley is enjoying an exceptional amount of press as of late. Last year, Wine Enthusiast crowned the area its “Wine Region of the Year.” Industry folks are gearing up for what promises to be yet another busy wine tourism season.

“The Willamette Valley is an amazing destination, and downtown McMinnville is nestled right in the heart of it,” added Stephenson. “Our concierge team has been having a great time helping our guests plan itineraries that help them fully explore Oregon wine country.”

The hotel is co-owned by Brian Shea and Ben Perle, in addition to Stephenson. The same three created and oversee Third Street Flats, also in McMinnville. Construction was carried out by R&H of Portland, the architect for this project was Nathan Cooprider, a McMinnville native, and the interior design was by Christina Tello of Tello Interiors. The lot the hotel rests on used to be the parking lot for the local paper and publisher of this monthly, the News-Register.

Page load link
We use cookies on our website to give you the most relevant experience by remembering your preferences and repeat visits. By clicking “Accept All”, you consent to the use of ALL the cookies. However, you may visit "Cookie Settings" to provide a controlled consent.
Cookie SettingsAccept All
Manage consent

This website uses cookies to improve your experience while you navigate through the website. Out of these, the cookies that are categorized as necessary are stored on your browser as they are essential for the working of basic functionalities of the website. We also use third-party cookies that help us analyze and understand how you use this website. These cookies will be stored in your browser only with your consent. You also have the option to opt-out of these cookies. But opting out of some of these cookies may affect your browsing experience.
Necessary Always Enabled
Necessary cookies are absolutely essential for the website to function properly. These cookies ensure basic functionalities and security features of the website, anonymously.
Functional
Functional cookies help to perform certain functionalities like sharing the content of the website on social media platforms, collect feedbacks, and other third-party features.
Performance
Performance cookies are used to understand and analyze the key performance indexes of the website which helps in delivering a better user experience for the visitors.
Analytics
Analytical cookies are used to understand how visitors interact with the website. These cookies help provide information on metrics the number of visitors, bounce rate, traffic source, etc.
Advertisement
Advertisement cookies are used to provide visitors with relevant ads and marketing campaigns. These cookies track visitors across websites and collect information to provide customized ads.
Others
Other uncategorized cookies are those that are being analyzed and have not been classified into a category as yet.
SAVE & ACCEPT
Go to Top